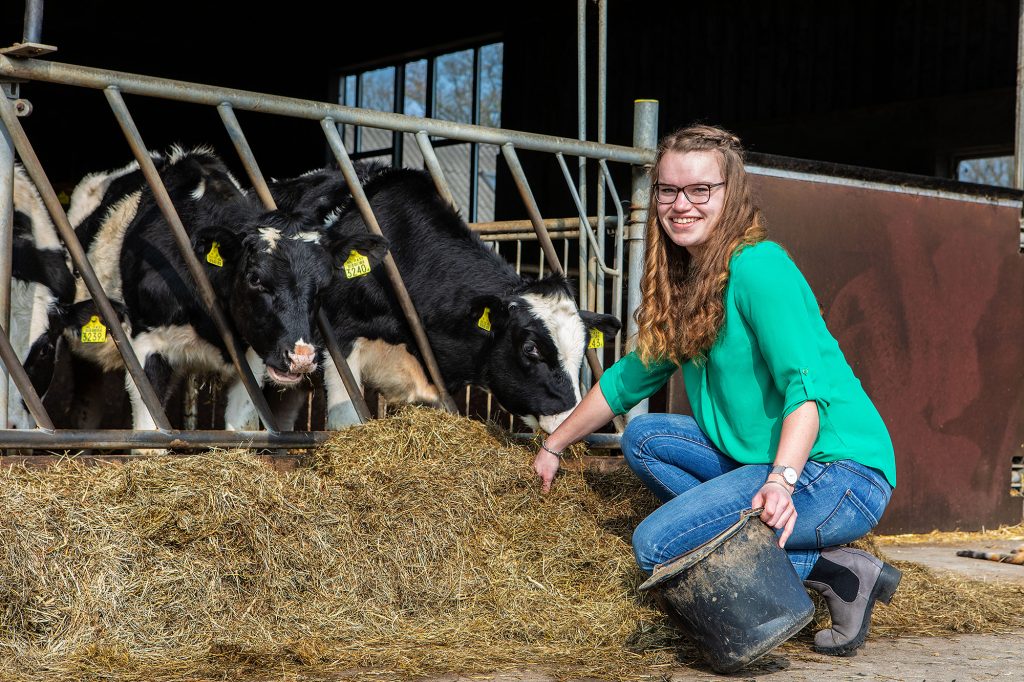 The future of dairy farming starts with the calf

“Our aim is to have the heifers of the future calve at 22 months. And that is only possible if nothing goes wrong during the calf rearing process,” explained Eline Hoekstra (20).

Eline is a third-year student in Animal and Livestock Farming at the Van Hall Larenstein University of Applied Science in Leeuwarden. She occasionally helps on her parent’s farm. How can we feed the world, without exhausting the planet? These are the types of issue Eline is examining at Van Hall Larenstein. “Dairy farms will have to produce efficiently, without loosing sight of animal welfare and biodiversity, not only in the Netherlands, but across the globe. The world’s population is growing rapidly. And those people need healthy food produced in a sustainable manner.”

This sustainable, future-oriented approach to production starts on a dairy farm with effective calf rearing. “Today’s calves will be dairy cows in two years’ time, and they must be able to produce milk ­problem-free for years.”

From the birth of the calf, the Hoekstra family focuses heavily on the future generation. “We operate four principles for providing colostrum: plenty, quickly, often and fresh. During their first three days, calves are fed four times a day.” Up to the age of nine weeks, the calves are then fed plentifully. “Many feeding programmes suggest a maximum of seven to eight litres of milk a day. Research has shown that at those volumes calves are still hungry. We took part in a trial organised by our veterinary practice, according to which calves were fed limited or unlimited amounts of milk. We are delighted with this innovative approach to feeding. We now provide up to a maximum of twelve litres a day.”

Milk feed is then cut back quickly, encouraging the take-up of concentrates and roughage. Our eventual goal is to inseminate yearlings at the age of thirteen months, and have them calve at 22 months.”

“The calves of today are the cows of the future.”

Eline is clearly interested in her parents’ farm. “But I am not yet sure whether I will take the farm over in the future. Dairy farming is a fantastic, varied profession, and I love dealing with the animals. On the other hand I would also like a job away from home.” At present, the family milks more than ninety cows. In Eline’s opinion, that is a good number now and for the future. “The ideal for me is a dairy farm that in principle requires no outside labour.”